The first tunnelling construction project to implement this health & safety initiative was the Turin–Lyon high-speed railway project, a project which is 270 km (170 mi)-long joining the cities of Turin and Lyon. TELT (Tunnel Euralpin Lyon Turin) is a French company founded in 2015 and is the binational public promoter responsible for the construction and management of the cross-border section of the Lyon-Turin mixed freight and passenger railway line. The cross-border area extends over a stretch of 65 km and is quite often referred to as the “TELT project”.

The Mont d’Ambin Base Tunnel is the main element of the TELT project which is currently under construction and at 57.5 kilometres (35.7 mi), will be one of the longest rail tunnels in the world. The twin-tunnel length comprises of 12.5 km in Italy and 45 km in France. This tunnel links the international stations of Saint-Jean-de-Maurienne and Susa, which are the connection points to the railway lines in France and Italy and is due for completion in 2032.

After a first phase of activity between 2003 and 2010, the work resumed from 2015 for the excavation of the second descent. From summer 2016 until September 2019, the TBM Federica dug 9 km of the base tunnel known as the Saint Martin-la-Porte section, or SMP4. The construction of the 9 km-long tunnels, along with twin 1.5 km-long drill and blast sections, has made it possible to gain a better understanding of a geologically sensitive area in view of the final works.

Figure 1 – overview of Mont d’Ambin Base Tunnel, including SMP4 section

TELT, while maintaining the leadership of the SMP4 project, entrusted the work to a group of enterprises that includes six companies – three French and three Italian – specialising in public works, led by Spie Batignolles TPCI. Other companies in the joint consortium included Eiffage Génie Civil, Ghella, CMC di Ravenna, Cogéis and Sotrabas.

French based Spie Batignolles TPCI is a major player in the construction sector both domestically and globally and are seen as an innovative industry leader, as they continuously strive for improvement including the implementation of new technologies for positive and safe outcomes.

In 2018, Health and Safety representatives at Spie Batignolles TPCI working on the SMP4 project anticipated that the 3km drill and blast section of the project may potentially produce an undesirable DPM load and therefore represented an unreasonable risk to workers.

Up until this point in time, the project had a monitoring regime which consisted of real-time fixed gases, monthly personal monitoring for crystalline silica and weekly air flow surveys.

Diesel emissions differ from gases and dust particles. DPM, sometimes referred to as DEEE (diesel engine exhaust emissions) are an aerosol. Whilst continuous gas and dust particulate monitors can be easily found, continuous real-time DPM monitoring has not previously been readily available. Current requirements for diesel monitoring systems include personal gravimetric devices, handheld monitors and above ground tail pipe testing – all of which do not provide a continuous picture of the ambient environment and are inefficient with some methods taking weeks before sample results are available.

Considering DPM exhaust monitoring had not yet been embarked on, the OH&S department set out to investigate the availability of DPM monitoring solutions. The department was keen to get an understanding of DPM in the ambient environment on an ongoing basis, just like they were getting for fixed gases. Traditionally, diesel particulate matter monitors were unable to monitor diesel fumes continuously, so the researchers looked further into what new technologies could be used. This research for potential suitable instrumentation led to the discovery of the Pinssar Diesel Particulate Reader (DPR).

The aim of the project was to understand the ambient DPM levels of the working area underground. The plan was based on the assumption that DPM levels would initially be above acceptable levels for the company and once the levels were understood, a DPM load reduction program would be implemented. The project lead coordinating the continuous DPM monitoring program, Mr Salvatore Maureddu, commented on the value of introducing continuous DPM monitoring.

“There is solid scientific research on the impact of the critical group 1 carcinogen to workers, notably in enclosed spaces. The World Health Organisation has also acknowledged and highlighted these impacts. Spie Batignolles believes work place health and safety is paramount to our core values and have identified diesel particle monitoring to be of importance. After extensive research we have partnered with Pinssar who are the only organisation worldwide who can offer the ability to continuously monitor levels in harsh work environments. By continuously monitoring DPM, Spie Batignolles is ensuring the health and safety of our employees and other contractors whilst working on this globally significant project.”

The Reader was installed in December 2018 and immediately provided valuable data on DPM levels. The site undertook an initial 3 week monitoring program to establish the average base load.

Operations were halted for three days over the Christmas break, however the Pinssar DPR continued to monitor the underground environment and provide data back to the project owner.

Upon returning from the break and prior to works re-commencing, the DPR data was reviewed on the dashboard which showed an obvious difference when comparing the two periods of time, being pre-Christmas and during the break.

The data was further analysed and the “shift average” view was applied to understand the trendlines as well as to understand what the average was over each 24hr period.

The 24hr averages were summarised for the two periods:-

Based on the data presented, management made a timely decision to support the recommendation.

The investigation began and the reason behind the higher than anticipated levels was soon discovered. The investigation quickly determined that the ventilation airflow parameters had been modified prior to Christmas.

Based on this finding, management instructed the team to revise the airflow parameters.

The results were immediate with the average DPM load exposure falling below the company’s desired 50 μg/m3 (0.05mg/m3).

The site acknowledged the immediate value provided by the Pinssar system. Management was satisfied that a data-driven decision could now be made which was not previously possible.

Further to this, the 24/7 monitoring of the operation validated the decision by management to adjust ventilation and ensure the health and safety of the workforce. 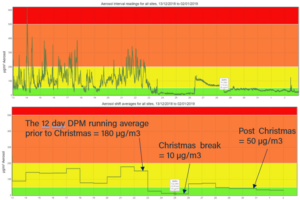 Considering the technology provided immediate value, management and OH&S outlined a key initiative to continue baseline monitoring along with a business-wide focus on their DPM mitigating controls.

Following the initial investigation, the DPM levels were reduced to meet the upcoming EU diesel exhaust emission Directive. The EU standard (50 μg/m3 or 0.05mg/m3) was determined by the business to be a relevant occupational exceedance level (OEL).  Furthermore, continuous monitoring verified the achievement of company OELs when undertaking standard tasks.

The company also reviewed DPM levels for non-standard tasks, and applied procedures for PPE as part of their diesel management system.

Over a short period of time, the contractor began to rely on the data from the Pinssar DPR to drive their ventilation management, by either increasing or decreasing flow rates to maintain a healthy environment.

This data was used to show specific DPM data on a real-time dashboard and was also used to present graphical information in reports to management.

With the new data, site management were able to ‘visualise’ and see ’event-based data’ – which established credible correlation between site-based events and the DPM readings– ultimately this made all the difference to the risk owner.  The risk owner acknowledgment of this data driven approach has resulted in operational decisions being made based on real-time data every day since.

Operators are now also more cognisant of the risks associated with DPM and look to the data provided to remain confident the site is managing DPM on a continual basis, which has been a positive cultural change in the workforce.

The site has since conducted other tests to identify how real-time monitoring can help with monitoring sub 800nm particles.

In March 2019 SMP4 identified welding underground not only contaminates the air around the welding station but the fumes travel a substantial distance and can potentially contaminate workers not directly involved with the welding process.

Whilst welding fumes essentially are almost gases the smoke from welding is made up of sub 800nm particles, which are detected by the Pinssar Reader and will alert passive workers that they too could be at risk. Considering smoke consists of a significant amount of sub 800nm particles, the detection of smoke is very evident on the dashboard and substantially different to the background DPM levels. Mr Salvatore Maureddu commented “You certainly can tell the difference between smoke and DPM on the dashboard” and then spoke about the additional value this provides the site, “As a direct result of the real-time monitoring program SMP4 has now changed our welding processes to ensure the health and safety of our workforce”.

Pinssar acknowledges the significance of SMP4 being the first to adopt continuous real-time DPM monitoring in a tunnelling construction project.

The experience gained from the Pinssar DPR data has been communicated to the broader TELT project and it is anticipated continuous real-time DPM monitoring will become a mainstay throughout the entire construction phase and fit-out phase of the 53 km project, due for completion in 2032.

Interest from other tunnelling projects within Europe and the UK has increased, particularly with the revised BS 6164 which nominates continuous DPM monitoring.

Pinssar are global leaders when it comes to monitoring diesel particulate matter in harsh environments. If you are interested in finding out more about Pinssar’s solution and the benefits for your next project, contact us.

What is British Standard 6164

The latest edition of the British Standard 6164 (known as BS 6164) was released in October 2019. Learn how it is changing the way the Tunnelling and Construction industry is advancing with leading practice for monitoring diesel exhaust emissions.

Pinssar’s latest CE certified units have been loaded up and are ready to get to work anywhere around the world.

Expanding our global reach to Southern Europe, Pinssar are pleased to announce the appointment of our newest staff member.